back to search results

Great Horned Owl – The breeding habitat of the Great Horned Owl extends from subarctic North America through much of Central America and South America south to Tierra del Fuego. They are absent from southern Guatemala, El Salvador and Nicaragua to Panama in Central, and Amazonia and the southwest in South America, as well as from the West Indies and indeed most off-shore islands.[5]

Within their habitat they can take up residence in trees that include deciduous, coniferous, and mixed forests, tropical rainforests, pampas, prairie, mountainous areas, deserts, subarctic tundra, rocky coasts, mangrove swamp forests, and some urban areas. It is less common in the more extreme areas (i.e. the heart of the deserts, extremely dense rainforests and in montane regions), generally absent from palustrine habitat[6], and missing from the high Arctic tundra. All mated Great Horned Owls are permanent residents of their territories, but unmated and younger birds move about a lot in search of company and a territory, and leave regions with little food in winter.

Great Horned Owl eggs, nestlings and fledgings may be preyed on by foxes, coyotes, or wild or feral cats. There are almost no predators of adults, but they may be killed in confrontations with eagles, Snowy Owls and, mostly, other Great Horned Owls. Far-ranging as it is, it is not considered a globally threatened species by the IUCN[7]. Owls have spectacular binocular vision allowing them to pinpoint prey and see in low light. The eyes of Great Horned Owls are nearly as large as those of humans and are immobile within their circular bone sockets. Instead of turning their eyes, they turn their heads. Therefore, their neck must be able to turn a full 270 degrees in order to see in other directions without moving its entire body.

An owl's hearing is as good – if not better – than its vision; they have better depth perception[citation needed] and better perception of sound elevation (up-down direction) than humans. Th 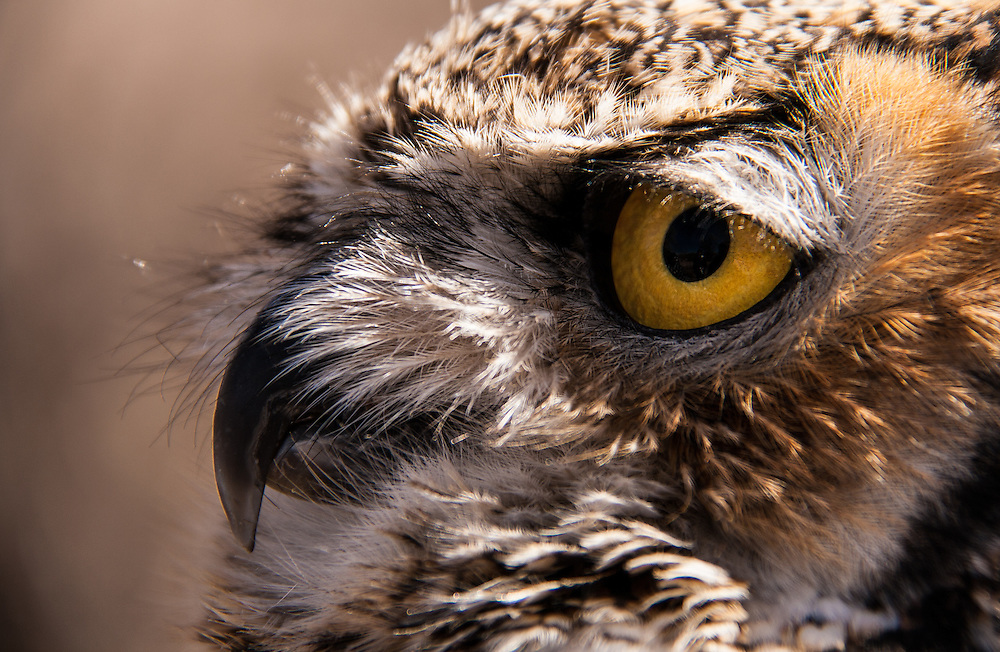